Previous meetings have made alternative arrangements like phone-in capability or have been canceled. These meetings are on the calendar as of today.

The Administrative Procedure Act (Texas Government Code, Chapter 2001) requires the notice published in the Texas Register to include a brief explanation of the proposed rule and a request for comments from any interested person. The notice also includes instructions for submitting comments regarding the rule to the agency, including the date by which comments must be submitted. Agencies must give interested persons “a reasonable opportunity” to submit comments. The public comment period begins on the day after the notice of a proposed rule is published in the Texas Register and lasts for a minimum of 30 calendar days.

Informal opportunities to comment occur before a rule is published in the Texas Register. HHS staff may solicit informal public and stakeholder input by:

The following are draft rules on which HHS is accepting informal public or stakeholder input. All rules are posted in MS Word format unless otherwise noted.

In honor of the 30th anniversary of the Americans with Disabilities Act (ADA), the Centers for Medicare & Medicaid Services Office of Minority Health (CMS OMH) is sharing messages and materials on supporting equal opportunities and inclusion for people with disabilities.

Recognizing the 30th anniversary of the ADA is part of our strategy to foster innovation by providing tools and resources to empower patients. Join us in recognizing this observance and use this anniversary to bring attention to health equity for people with disabilities.
Resources for Consumers and Patients

Kidney transplantation from deceased donors with HIV to people living with both HIV and end-stage kidney disease is feasible and safe, investigators supported by the National Institutes of Health have found. Their study demonstrates that the pool of available kidneys for people with HIV can be expanded by including donors with HIV, making more kidneys available for all who are awaiting a transplant.

The new findings build on research from 2019, when scientists from the University of Cape Town and NIH reported that people living with HIV who received kidney transplants from deceased donors with HIV had high overall survival and kidney graft survival after five years.

Today the European Medicines Agency (EMA) announced it has adopted a positive scientific opinion on the dapivirine vaginal ring for use by cisgender women ages 18 and older in developing countries to reduce their risk of HIV infection. This milestone marks an important step toward expanding the number of biomedical HIV prevention options available to women in sub-Saharan Africa, who are among those most affected by the HIV epidemic. The National Institute of Allergy and Infectious Diseases (NIAID), part of the National Institutes of Health, thanks and congratulates everyone who led, conducted and participated in the research that led to the positive opinion.

The Health and Human Services Commission (HHSC) adopted amendments to the rule governing the Uncompensated Care (UC) program. The amendments include clarifying what constitutes total eligible uncompensated costs and eligible hospital charity-care costs, as well as the process for returning the non-federal share of funds to governmental entities in the event of certain recoupments.

The amendment to §355.8212(g) revises the definition of “total eligible uncompensated costs” to clarify that a hospital’s total eligible uncompensated costs include the unreimbursed charity-care costs that are not included in the hospital’s state payment cap for interim UC payments, or the hospital’s Disproportionate Share Hospital specific limit in the UC reconciliation, for the corresponding program year. The amendment also clarifies that uninsured charity-care payments must be included in the hospital’s UC application and will be considered in the calculation of a hospital’s annual maximum UC payment.

The amendment to §355.8212(j) clarifies that, in the event funds are recouped from a hospital, the non-federal share will be returned to the governmental entities in proportion to each entity’s initial contribution to funding the program for that hospital’s service delivery area in the applicable program year.

The adopted rule was published in the July 24th edition of the Texas Register.

The Texas DSHS Newborn Screening (NBS) Laboratory is updating the result reporting statements for the following abnormal results to reflect the current Clinical Care Coordination follow up care recommendations. These updates are scheduled to go into effect August 10, 2020. All changes are indicated in red. 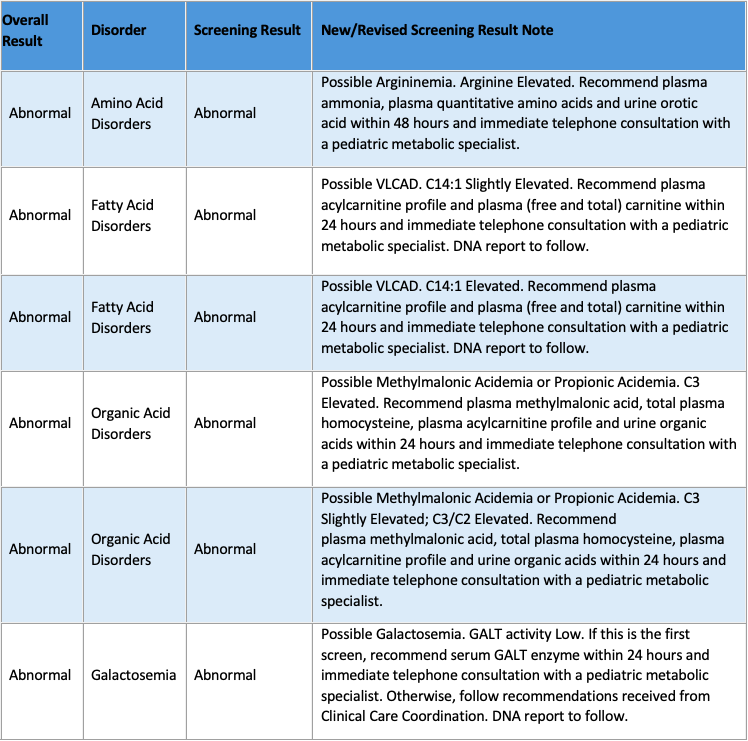 A full list of all possible results can be found here: http://www.dshs.texas.gov/lab/nbs/results/.